People talk about things being stranger than fiction, and in my mind, I imagine a perpetual battle between reality and fiction (which we can imagine as a single universe containing all the individual fictional universes invented by all human beings, everywhere, ever), over who is the weirdest. One day, reality gets the edge. The next day, someone comes up with populating Everquest II with an evil Curt Schilling. Bizarro Curt also supports the ALS association.

In the last three weeks, I’ve driven about 2,800 miles between Boston and Montreal, Boston and State College, PA, New Wilmington PA, and southwestern PA. It’s good. I like driving. It gets to be very zen. Or at least Helmeckian. You just let the road come to you, and sit.

As previously mentioned, Montreal was a mini-family reunion, where I got to see my sister, brother, sister-in-law, and meet my new niece Eva for the first time. Picked up a copy of Rip, Rig, + Panic’s “God” at a pretty reasonable price at a great little record shop that seemed frighteningly as if I had stocked it. Ate a lot of fantastic Thai vegetarian food at the amazing Chu Chai (we went once and got take-out once. What with the baby and Simon’s late-night post-ballet schedule, we ended up eating take-out in the hotel room a couple of times). I was just soooo happy to see my sibs and have some time off, all in a fantastically cool city. We went to State College over Mother’s Day weekend. Kim, Glenn, and other relatively fresh-hatched niece Hope were there. Got some great finds at the AAUW book fair; about 10 paperbacks, three books of music (one compiled by Pete Seeger, one German language accordion book), and some sheet music, all for under $9. Rented an economy car to drive back in (so that Terri could have the Civic in State College for the week) and comically ended up with a Nissan Xterra, which was literally the only thing that Alamo had to give me.

Last weekend was my youngest sister’s college graduation. *sniff*. The weather held out, and it turned out to be a beautiful day.

So, Ed’s post today made me think about why I actually like interleague play. Sure, it is a gimmick, and when it was devised, the sport was sort of at a nadir, so it was almost certainly introduced for the wrong reasons.

But the two leagues are so separate that without it, it’s almost like they’re two different sports entities who happen to have a game against each other at the end of the year. You don’t get the same thing in football because there are so many fewer games that fans from each league have enough time to pay attention to what’s going on in the other league. Baseball, it’s hard to keep up with a single team let alone what’s going on in the other league.

And, if I may step out on a limb, the other big reason that interleague play is good is that it is existentially unsettling. Because of some small de jure differences, huge de facto differences in the way the game is played have evolved over time. I don’t think that interleague play has changed this or even slowed the trend toward deviation between the two leagues. But it does create this one magical time every year where you are forced to realize that what you thought was fixed, inevitable, essential, is actually radically contingent, and could have easily been otherwise.

Plus, I like to see some National League style play occasionally, it it’s also high-larious to see some of the AL pitchers at bat.

Universal Hub has a great tidbit on why Boston, Cambridge, and other towns along the Charles aren’t as up-the-creek as some neighbors to the North:

…it might also have to do with a decision made by the Army Corps of Engineers in the 1970s. …The idea was that the various parcels of land would act as giant natural sponges during floods, absorbing vast amounts of water quickly, then releasing it slowly as the river receded. And it seems to work. During heavy rain (or the spring thaw), the Medfield/Millis border becomes a large lake – but since nobody lives on the Corps land, nobody has to be evacuated, either. You can see similar flood control in action from the top of Millennium Park in West Roxbury – or even across from the northbound side of Rte. 128 just past Great Plain Avenue.

Acquiring the land cost $10 million – or 10% of what the government had originally expected to spend on manmade structures.

According to this, the word “irony” comes from the Greek word eir?neia, which referred to the Socratic argument technique of feigning ignorance to get your opponent to say something you can poke holes in.
American Heritage gives the etymology as

I like the idea of simulated ignorance, and I think it’s kind of amazing that it is linked with both the ideas of dissembling and speech.

While I’m attracted to these things, I am also not a fundamentally ironic person. I think if you try to live on feigned igorance alone, you sort of starve. Eventually, you have to try to know something.

… but I saw someone actually inside the Harvard Square station on the outbound platform with a lit cigarette. The original train had gone express to Alewife. At least she put it out before boarding the train when it came. Though I think it was the first time I saw someone use their wheelchair’s wheel as an ashtray. 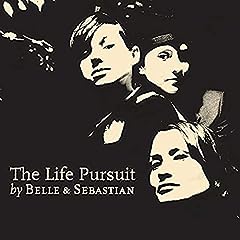 I finally bought the new Belle and Sebastian album. I thought this would be the first one I didn’t even bother with. I was wrong. Last album was pretty much a write-off, except for the sublime “Piazza, New York Catcher”. Anyway, I’m not sure that I would have bought this album if not for the strength of that one song and, it’s pathetic, but if the leftmost cover model didn’t look uncannily like my sister April, especially with her new short un-ballet haircut.

B&S were so much better when they just sounded like themselves. “Song for sunshine” sounds like the worst Sly and the Family Stone song ever. “The blues are still blue” sounds like T. Rex. “White Collar Boy” sounds like “Spirit in the sky” for the first 15 seconds, down to the reverb.

If you crave new B&S without all the faux Partridge Family BS, just buy the live version of If You’re Feeling Sinister. Or re-listen to the 1996-7 series of 3 EPs.
(*Thanks to Terri for coining the ‘partridge family’ line).